Colour range of Australian sapphires. Each of these 41 brilliant cut gems is about 3 mm in diameter. R30650. Source: Geoscience Australia

Sapphires and rubies are both gem varieties of the mineral corundum. They have the same chemical composition and structure. Gems generally get their colour because of certain metals or impurities contained in the mineral. The impurities in corundum gems produce the large range of colours found. Sapphire and ruby crystals can grow to large sizes (crystals have been found weighing more than a kilogram). Sometimes they contain inclusions of crystal needles producing a six or twelve pointed star reflection. These are called star sapphires or rubies.

Sapphires contain traces of iron, titanium and nickel, giving them a range of colours including green, yellow, blue, orange, black and pink. Blue sapphires are the most common and gems with a rich blue to violet colour are the most desirable. Used alone, the word 'sapphire' means blue corundum. When the colour of a sapphire is not blue, the colour is used in the name, for example, pink sapphire, yellow sapphire, or green sapphire. Rubies are the red variety of corundum and they contain chromium. A small amount of chromium in corundum will produce a pink colour, but to be considered a true ruby, there must be enough chromium for the gem to be a distinctly red, or slightly purplish-red colour. Sometimes corundum is heated to bring out the red colour. Images of some Australian rubies can be found at Google Arts and Culture - Gems from the Safe.

Ruby and sapphires are both made of corundum (aluminium oxide - Al2O3). Corundum is one of the hardest known natural substance after diamond. In addition, because corundum is so hard and resistant to weathering, it can also be found in sedimentary deposits and sedimentary rocks. This mineral is also known for its high density which is unusual for a transparent mineral. 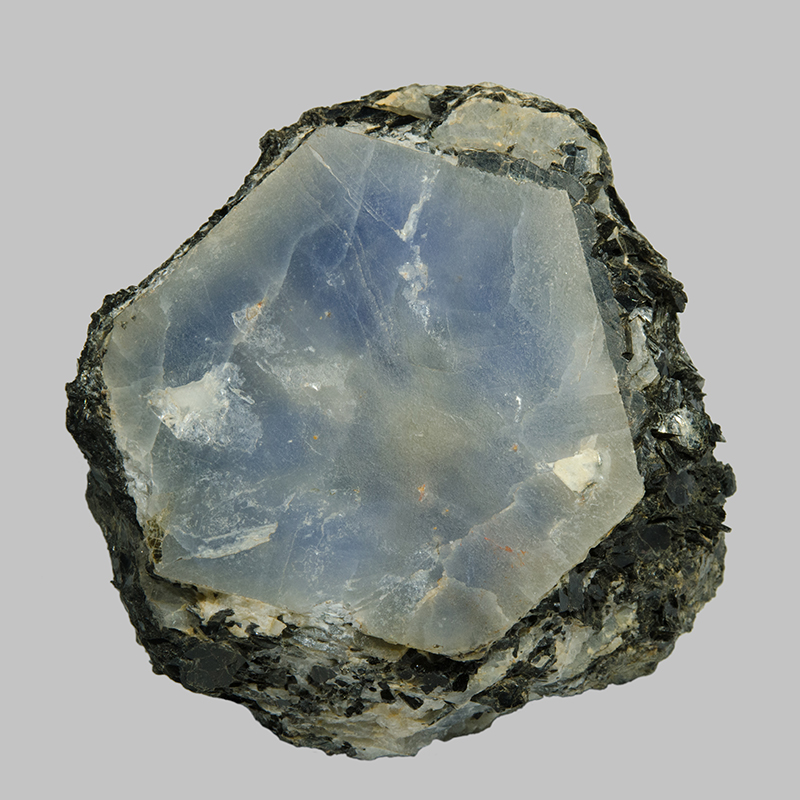 Sapphires and rubies are used in jewellery and ornaments because of their attractive colours.

The hardness of corundum also makes it a great material for industrial abrasives. It is used to make grinding wheels, emery paper, and abrasive powders used for grinding and polishing. Corundum is also used to make electronic instruments, components and windows that are scratch- and UV- resistant. Ruby bearings in a watch with a "jewel" movement. Source: Wikimedia Commons

The first working laser was created by Hughes Research Labs in 1960. The instrument contained a ruby crystal that produced an intense beam of light when blasted by electricity. Today lasers contain synthetic corundum, and are used in barcode scanners, rangefinders, printers, for cutting tough materials, hair and tattoo removal, and in surgery.

For centuries, sapphires and rubies have been associated with wealth and royalty. There are many myths and legends featuring sapphires as magical healing or protecting stones. In 1200 BCE, Helen of Troy’s beauty was believed to be associated with a magical star sapphire. King Solomon who lived around 1000 BCE was reported to be a big fan of sapphires, and in ancient Greece and Rome, royalty owned these gems and were convinced that they protected their owners from harm. In addition, rubies and sapphires are mentioned in the bible several times, and clergy during the Middle Ages, wore sapphires to symbolise heaven. Red zircons were found with sapphires in Central Queensland in 1875. Similarly, in 1886, bright red crystals were discovered in eastern MacDonnell Ranges, sparking a rush of mining claims. These crystals were later identified as red garnets not rubies. However, several Australian localities were named after rubies, despite the mistaken identity of the gems, including Ruby Gap in Northern Territory, Rubyvale in Queensland and Ruby Hill in New South Wales.

In the late 1800s and early 1900s, most of the sapphires and rubies from Australia ended up in Europe as many of the miners in the Central Queensland gem fields originally came from Russia. As a result, the Russian crown jewels and lots of jewellery belonging to Russian Nobility contain gems from Australia. After the Russian revolution in 1917, there was a downturn in the sapphire industry and few miners remained in the Australian sapphire fields.

In 1968, the Queensland government set aside land for the use of small sapphire miners, prospectors and gem collectors, because of an increase in interest from tourists and gem buyers, mostly from Thailand. The 1970s also saw an increase in mining using heavy machinery, leading to a small mining boom in the Queensland sapphire fields. This lasted until sapphire prices fell in the late 1970s.

One of the most famous sapphires, is the blue sapphire given to Princess Diana in her engagement ring, now worn by Kate Middleton. However, there are other famous sapphires belonging to the royal family. The Stuart Sapphire is a large oval-shaped 104 carat (20.8 g) gemstone, found on the Imperial State Crown. The crown was designed in 1937 for King George IV, and now belongs to Queen Elizabeth II. St. Edward's Sapphire, is also located at the top of the crown along with 15 other sapphires.

The Star of India, at 563 carats, (112.6 g) is the largest gem-quality, blue star sapphire in the world. It was discovered more than 300 years ago in Sri Lanka, but formed about 2 billion years ago. Valuable sapphires are still found in Sri Lankan deposits of sand and gravel left by ancient rivers. Industrialist and financier J. P. Morgan presented the sapphire to the New York Museum of Natural History in 1900. Sometimes sapphires can have bands of colour in them. The 85 carat (17g) Tomahawk Tiger, found at Tomahawk creek in Queensland is a yellow sapphire with blue bands. The sapphire was sold for $1 million in 2010 to a collector from the USA. The most famous Australian sapphire is the Black Star of Queensland. It is a 733 carat (146.6 g) black star sapphire. The crystal was discovered by a 12 year old boy in the 1930s near Anakie Queensland. The boy's family used it as a doorstop in their home for over a decade, before they realised the value of the stone. Corundum, (sapphire and ruby) forms deep in the Earth's crust and is brought to the surface in igneous rocks that are high in aluminium but low in silicon, such as basalts. Corundum is also found in rocks that have been metamorphosed.

The basaltic, volcanic rocks in Eastern Australia are a major source of corundum, sapphire and ruby, however, the minerals are rare and not commonly mined directly from these rocks. This is because it is very expensive to extract small gems from hard rock and many of them are broken during mining. Economic sapphire and ruby deposits are only found when an igneous rock, such as basalt, is weathered and eroded away, leaving behind the tougher and more resistant minerals such as sapphires and rubies. These then become concentrated in certain parts of the landscape after being transported by rivers and streams (placer deposits). Most of the sapphires and rubies from eastern Australia occur in placer deposits.

Ruby deposits are more uncommon as they depend on the presence of the rare element chromium. Ruby is usually found in metamorphic rocks, such as those in the Harts Range in the Northern Territory. However, a more transparent, gemstone-quality ruby comes from a few areas in eastern Australia where it has been brought up from underlying metamorphic rocks by volcanic action.

Marc Antoine Gaudin synthesised the first rubies by fusing alumina with chromium in 1837. Ten years later Jacques- Joseph Ebelmen made artificial sapphires by fusing alumina with boric acid. Auguste Verneuil developed a process for producing large flawless sapphires and rubies in 1903. These crystals have many industrial uses including as mechanical bearings, as laser components, and in optics.

In the 1980s, Australia was the source for about 70% of the world’s sapphires, mostly from New South Wales. However, mining with machines became more common in other countries, so Australia’s share of the market dropped to about 20-30%. Sapphires and rubies have been found in all eastern Australian states, including Tasmania. In New South Wales, sapphires and rubies are mined in the New England region, around Inverell and Glen Innes, and north-west of Goulburn, near Oberon. The Kings Plains area, near Inverell, has some of the richest deposits of gem-quality sapphires ever mined.

Corundum has also been mined in the Central Queensland Gemfields at Anakie, Rubyvale, Sapphire, the Willows and Glenalva. In addition, sapphires have been recovered from old tin workings along the Weld River in Tasmania. There are many sites where fossickers can try and find sapphires and rubies in these regions too.

The most significant occurrence of ruby is near Gloucester, near Mount Barrington, an old volcano. Rubies have also been found in the vicinity of the Macquarie and Cudgegong Rivers and near Tumbarumba.

Currently commercial mining of corundum (including sapphire and ruby) still occurs at the Anakie and Lava Plains placer deposits in Queensland, and the New England area of New South Wales. Open pit mining is used to extract the corundum ore from the gravels. In many cases the mining operations are small and the pits quite shallow. Tools used might include jack hammers, excavators or shovels.

Some countries in Africa and South America use high water pressure mining to produce large quantities of rough corundum gems. However, many gem buyers boycott companies using this practice, because this method strips away all the top soil destroying the local environment.

Once mined, corundum can be separated from clay and gravel because it is more dense and heavy. Usually, the gravel is broken up and sorted into size fractions in a rotating drum (trammel), and then washed either by hand or with a high pressure water jet, over filters with various size holes. The heavy grains will sink and the lighter materials, like clay, will wash over the top.

The remaining material also contains other heavy minerals such as magnetite and zircon. Magnets can be used to get rid of magnetic material and then zircons are removed by hand. The corundum is then visually assessed and graded according to size and colour.

Sapphires and rubies can be artificially altered to improve their value or appearance. Heat and irradiation can enhance the colour intensity as well as the clarity of the gemstones. Sometimes sapphires are heated in the presence of a material that can penetrate into the crystal and change the colour. Gems can be coated with a light film for protection and surface fractures can be filled with oils, waxes, resins or glass.

The cut and polish on a sapphire or ruby is determined depending on the colour and shape of the crystal. Sapphires and rubies can be cut in a number of different ways because the crystals are formed as a hexagonal shape. The majority of gems have Oval, Round and Cushion cuts. Rubies are generally cut with the top perpendicular to the vertical crystal axis. This displays more of the purple-red colour rather than the orange-red colour. Regardless of the shape of the gem, the edges and the facets on the top of the sapphire or ruby (the crown), are cut to be symmetrical. Large sapphires that are not suitable for cutting can also be carved.